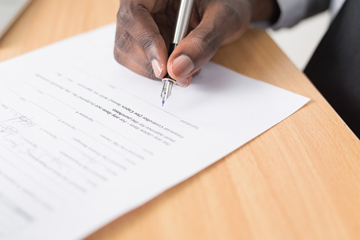 Pursuant to an emergency order passed by the Lieutenant Governor in Council on April 7, 2020, the Ontario government will permit legal professionals to witness the signing of wills and powers of attorney through the use of audio-visual communication technology such as Skype or Zoom.  The order was passed in response to the coronavirus pandemic and the rules around physical distancing.

In the midst of the global pandemic, lawyers have seen an increase in requests for new or updated wills and powers of attorney.  Similar legislation has been passed in other Canadian provinces, including British Columbia and Quebec.

Compliance with the formal witnessing requirements in Ontario’s Succession Law Reform Act (“SLRA”) has become increasingly difficult as people are physically distanced from each other, particularly for those who are in self-isolation or quarantine.  Vulnerable individuals are especially concerned about the risks associated with in-person meetings.

Pursuant to the SLRA, a will must be signed at its physical end by the will-maker (known as the “testator”) before two witnesses who are present at the same time.  Each of the required witnesses must then sign in the presence of the testator.  Neither witness should be a beneficiary or the legal spouse of a beneficiary as failure to abide by this restriction renders the gift to that beneficiary null and void.

Pursuant to the emergency order, the requirement that the testator and witnesses “be present or in each other’s presence for the making or acknowledgment of a signature on a will” may be satisfied by means of audio-visual conferencing.  The order requires that at least one of the two witnesses be licensed by the Law Society of Ontario as either a lawyer or paralegal.  This requirement is meant to serve as a safeguard to ensure the testator has the requisite degree of mental competence to give instructions for a will, and to ensure the testator has not been subjected to any undue influence or duress.  On April 22, 2020, the emergency order was amended by regulation to specifically permit signature of wills executed virtually by counterpart – that is, the testator may sign and witnesses may subscribe on separate copies of the will, which copies shall together constitute the testator’s will.  Previously, all three signatures had to be on the same document, which necessitated couriering the document from the testator to each of the witnesses.

The emergency order is not retroactive – it is applicable to wills and powers of attorney made on or after April 7, 2020 – and will be in place for the duration of the declared emergency, the coronavirus pandemic.

The legislation does not apply to holograph wills.  A holograph will is a will which is entirely in the testator’s own handwriting, and requires no witnesses or other formalities of execution.  While rarely advisable, the ability to make a holograph will can sometimes be useful in emergency situations.

Laura Nichols is an associate with Sotos LLP in Toronto, Canada’s largest franchise law firm. Laura practices business law with a focus on franchising, licensing, and distribution. She also provides counsel on private wealth matters. Laura can be reached directly at 416.572.7318 or lnichols@sotosllp.com.

The Proper Use of Releases to Defeat Franchisee Claims

Can a Dealership Unilaterally Close its Doors During a Pandemic