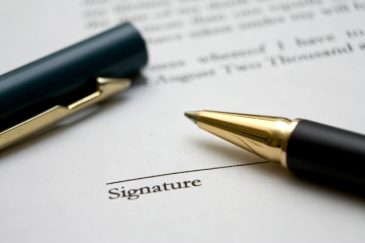 When negotiating an agreement you may run into a clause titled Right of First Refusal (“ROFR”) or Right of First Offer (“ROFO”). Many people might read over such clauses and not pay much attention. Others may pay attention but not know if or how either clause may serve their interests. Regardless of which one they select, there can be unintended consequences down the line. Similarly, how the clause is drafted can have a material impact on the parties’ interests.

Two parties intended to start a franchised restaurant business together. We’ll call them Joe and Hank. Each owned 50% of the shares of the company that was to operate the restaurant. They signed a unanimous shareholders’ agreement regarding the operating company. In negotiating this agreement, they turned their minds to whether a ROFR would be a good option for the disposal of shares.

Initially, their lawyer drafted a ROFR that made no provision for a partial take-up of shares by the non-selling shareholder. In other words, under that proposed clause, when and if either of Joe or Hank decided to sell his interest and leave the business, the other one would have the option of buying all or none of the offered shares.

Not long after commencement of business operations, tensions arose and Joe decided to sell his share and leave the business. He found a third-party purchaser to buy his entire interest in the business. Joe gave notice to Hank of his intention to sell. Under the ROFO in their agreement, Hank had the option of buying some or all of Joe’s shares before Joe could sell to a third party. Hank decided to purchase only 10% of the offered shares. This situation placed Joe at a very disadvantaged position. First, he would lose the third party offer, which would have given him a clean break. Second, it converted Joe’s remaining share of the business into a less appealing minority position. As for Hank, the partial pick-up eliminated the prospect of deadlocking in the future with a business partner that he did not know.

Under the shareholder agreement in the case under consideration, the parties had agreed to arbitrate any disputes. The party that we called Joe commenced the arbitration process arguing that the ROFO led to a commercially absurd or unreasonable result in providing for a right of partial pick-up. The arbitrator disagreed and dismissed the claim.

Joe then appealed to the Ontario Superior Court of Justice, which also dismissed the appeal. The right of partial pick-up was not a commercially unreasonable term. One of the biggest disincentives of a ROFO for a non-selling shareholder is the loss of control over the identity of the purchaser. In fact, under the appropriate circumstances, a ROFO that permits a non-selling shareholder to purchase the offered shares partially can promote a sensible commercial result. Nor did the fact that this ROFO led to unequal partnership interests render the ROFO unreasonable or commercially absurd.

B. How Joe Lost the Case: ROFO vs. ROFR

Both the ROFO and the ROFR relate to exit plans in various commercial contexts such as shareholder agreements, leases and joint land ownership. The goal in drafting such exit plans is often not so much to protect the selling party, such as Joe, but to give the remaining parties some assurance that the sale of that party’s interest will not impose on them inappropriate business partners in the future. However, as was seen in this case study, the rights of the leaving party can also be impacted in unexpected ways by the choice of clause.

In shareholder agreements, a ROFR requires a shareholder who has already received an acceptable purchase offer from a third party to give the other signatories the chance to match that offer before concluding any sale with the third party. The third-party offer has to be in good faith and non-collusive. On the other hand, a ROFO typically requires a party who wishes to sell his or her shares to offer to sell the shares to the other party or parties to the agreement before looking for potential buyers beyond the existing parties. Therefore, a ROFO enables the exit provision to be triggered without the selling party first having to secure a third party buyer.

Nonetheless, as the saying goes and the above case shows, the devil is in the details.

The selection of a ROFR or ROFO provision in an agreement should be driven by the business objectives of the parties. The parties need to understand the implications of their choice because when applied to future events and considerations the outcomes can be quite different from those expected.

Counsel can play a critical role in assisting a party to an agreement in understanding these choices and in ensuring that relevant clauses are drafted properly to protect the party’s interests. At Sotos LLP, we represent parties getting into franchised and other businesses and apply our leading experience to this exercise.

[*] This case study is taken with some modification from recent litigation reported as 2293611 Ontario Inc v JSegal Holdings Ltd, 2016 ONSC 7577.

Delivery Apps in Restaurant Franchising: How to Deal with Brand Protection?